The lifestyle brand’s social entrepeneurship program honours the legacy of Inuit women in Canada’s North and is driven by its purpose platform, HUMANATURE 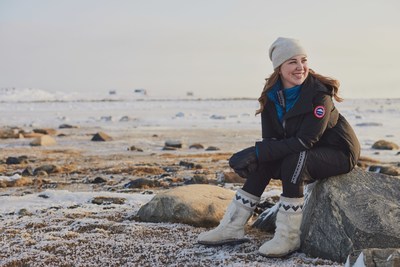 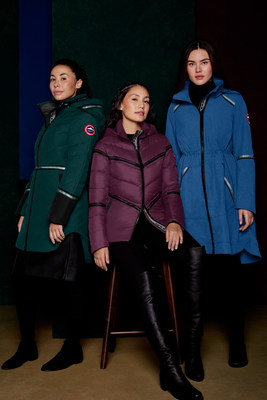 “Canada Goose was born in the North. We are committed to supporting the people and communities of the region, creating global awareness and understanding of their culture and craft. Project Atigi has always meant more than beautiful designs and donations, it’s about celebrating Inuit heritage,” said Gavin Thompson, Vice President, Corporate Citizenship, Canada Goose. “We have long revered Victoria and are honoured to be able to bring her story to life globally through these unique pieces.”

Established in 2019, Project Atigi has evolved and expanded with each collection, while highlighting the heritage and craftsmanship of Inuit, the original parka makers. This third chapter continues that evolution, celebration, and appreciation. Proceeds from the first and second Project Atigi collections totaled more than $165,000, supporting regional programming, education, employment and cultural preservation programs through ITK. This year’s goal is to exceed the 2019 and 2020 collections.

“ITK is grateful to Victoria Kakuktinniq for contributing her immense talent to this year’s installment of Project Atigi, which brings Inuit style and ingenuity to audiences worldwide,” said Natan Obed, President of Inuit Tapiriit Kanatami. “Our ongoing relationship with Canada Goose helps to empower Inuit craftspeople, support entrepreneurship and community development in Inuit Nunangat, the Inuit homeland in Canada, and educate consumers about Inuit history and culture. Congratulations, Victoria, on your beautiful collection.”

“Project Atigi is so empowering – for myself, my community and other Inuit women. Sewing traditional garments is an important part of life in the North. We are artists, we tell our stories through our product. It’s more than our livelihood, it’s a way of life,” said Kakuktinniq. “Bringing my designs to the global stage is important because it celebrates, educates and inspires. I’m grateful to be a voice for my culture and to give back in such a profound way.”

Kakuktinniq is known for fusing traditional garments with a modern style. She brought this iconic approach to the collection, bringing the characteristics of traditional Inuit garments – hoods, hems and trims – with modern silhouettes. The collection’s three pieces, all aptly named after their designer, are created for year-round pursuits, each with feminine details and flattering shapes. The Kakuktinniq Parka delivers warmth and protection in the harshest conditions, while the Kakuktinniq Down Jacket is a lighter weight piece for versatility across seasons. The Kakuktinniq Jacket is a windproof and water repellent piece for transitional temperatures and everchanging elements. The latter styles were designed to be layered together for added protection and warmth.

Kakuktinniq’s story is further reflected through the collection’s rich colour palette. Dark Jade Green, Amethyst, Dark Azure and Black evoke the Northern Lights, representing the night sky from her hometown of Rankin Inlet. A bespoke tattoo trim, created by her for this collection, also finishes off each style.

“Inuit have a long history of traditional tattooing. The designs and their meanings vary between people and communities,” explains Kakuktinniq. “This specific design represents key milestones in my life, my strength and is a tribute to my parents and daughter, who have always supported me personally and professionally.”

Continuing its respect, appreciation and support of the North and its people, Canada Goose partnered with Inuit women to feature in the collection’s campaign. Singer, Shina Novalinga; model, Willow Allen; and actress, Marika Sila are activists, known for advocating for their culture and championing equal representation.

Project Atigi is a part of Canada Goose’s purpose platform, HUMANATURE, which unites its sustainability and values-based initiatives. The platform was born from the notion that humanity and nature are reliant on each other, as everyone has an inherent responsibility to give back, protect the planet and make an impact. The platform underscores the brand’s purpose to keep the planet cold and the people on it warm. As a values-based initiative, Project Atigi reinforces the brand’s commitment to people, communities and the planet.

The Project Atigi 2022 collection is available beginning today, January 24, in Canada Goose’s stores around the world and online at canadagoose.com.

About Canada GooseFounded in 1957 in a small warehouse in Toronto, Canada, Canada Goose (NYSE:GOOS,TSX:GOOS) is a lifestyle brand and a leading manufacturer of performance luxury apparel. Every collection is informed by the rugged demands of the Arctic, ensuring a legacy of functionality is embedded in every product from parkas and rainwear to apparel and accessories. Canada Goose is inspired by relentless innovation and uncompromised craftsmanship, recognized as a leader for its Made in Canada commitment. In 2020, Canada Goose announced HUMANATURE, its purpose platform that unites its sustainability and values-based initiatives, reinforcing its commitment to keep the planet cold and the people on it warm. Canada Goose also owns Baffin, a Canadian designer and manufacturer of performance outdoor and industrial footwear. Visit www.canadagoose.com for more information.

About Victoria Kakuktinniq – Owner, Victoria’s Arctic FashionFounded in January 2014, Victoria’s Arctic Fashion (V.A.F.) is an up-and-coming design label which fuses traditional northern garments and accessories with a modern style. Started by Victoria Kakuktinniq, V.A.F. has already established itself across Canada as a Parka brand favourite in the North. Victoria has showcased her designs at Paris Fashion Week, New York Fashion Week, and Toronto Fashion Week. She is also the Winner of the 2015 Nunavut Trade Show Business of the Year Award. V.A.F. designs are sold throughout Canada and Greenland. With a unique look that embodies Inuit traditional parka design with a focus on sustainability and the use of traditional fabrics, furs and skins.

The creator of V.A.F., Victoria Kakuktinniq, is an Inuk woman, born and raised in Rankin Inlet, Nunavut. She has always been deeply immersed in her Inuit Culture. Victoria has been fortunate to be raised by a line of strong, Inuit Women. Growing up, she was surrounded by seamstresses. Her mother, grandmother, and sister all used their traditional knowledge of sewing to make beautiful handmade traditional garments for their family to help keep them warm in the harsh Arctic climates. Victoria was always so inspired by these women and felt compelled to follow in their footsteps. Following a traditional sewing course in Rankin Inlet, she knew she had found her passion and soon after, enrolled at MC College in Winnipeg, where she would perfect her craft in the Fashion Design and Apparel Production program. Victoria gained notoriety there for her form-fitting parkas, with signature embroideries. Soon after completing the program, Victoria returned to Nunavut and created Victoria’s Arctic Fashion where she has become a change maker in the modernization of the traditional parka.

About Inuit Tapiriit Kanatami (ITK)Inuit Tapiriit Kanatami (ITK) is a federally incorporated registered charitable organization representing the rights and interests of over 65,000 Inuit in Canada on a range of socio-economic, cultural, health, environmental and political issues at the national level. ITK works on behalf of Inuit who live in the four land claim settlement regions of Inuit Nunangat – the Inuvialuit Settlement Region, Nunavut, Nunavik, and Nunatsiavut – and across Canada.