MIAMI, March 8, 2022 /PRNewswire-HISPANIC PR WIRE/ — Casalú, a rum based hard seltzer focused on delivering a feeling of home and heritage, while inviting others to share Latino culture, is set to launch across Miami later this month. Made with dark aged rum, 5.9% abv./vol, Casalú will be available with an SRP of $12.99 per 4-pack of 12oz cans. Crisp and balanced with the perfect amount of buzz, Casalu’s first offering, “Limón”, brings authentic Latino roots to the hard seltzer market. The name stands for the company’s vision. Casa, a sense of home and heritage. Salú, an open door to all who want to share Latino culture. 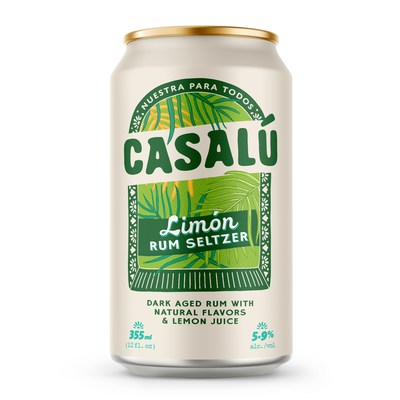 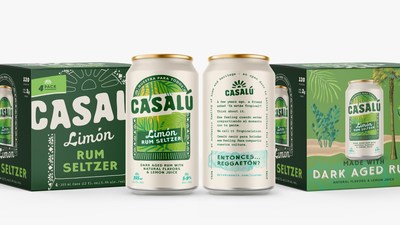 “From day one, it was clear that something was missing in the seltzer market. Despite all the noise about new brands appearing, none seemed able to truly speak on behalf of Latino culture and express it authentically. Casalú was born to pay homage to our culture and invite everyone to share it. We took dark aged rum, our spirit of choice, and used it as a base. We had not seen it widely used in the seltzer space, which for us didn’t make any sense. Using rum as our base, we created a refreshing and crisp seltzer that both the new generation of drinkers and our grandparents can enjoy together. That’s why we are so proud to bring Casalú to the world,” says Ricardo Sucre, co-founder of Casalú.

Sucre, who was born in the United States and then lived in Venezuela for 20 years, along with Casalú co-founders Gabriel Gonzalez of Venezuela and Gustavo Darquea of Ecuador, first met while attending North Carolina State University. Sucre and Darquea received degrees in Industrial Engineering and Gonzalez in Business & Entrepreneurship. It was throughout college that the three friends began sharing their drink of choice: rum.

“The idea for Casalú began with Ricardo and his dislike for beer. Since we’ve known each other, Ricardo looked for any option that wasn’t beer and when the seltzer boom started, he found his drink. Although, none spoke to him and used rum the way he liked it. Ricardo started experimenting at home with dark aged rum and a SodaStream and the first version of Casalú was born. He gave it to everyone, and I was one of the first to try it. It just clicked. For us, it didn’t make any sense that we could identify a brand with clear Latin roots in every alcohol and liquor category, but none that resonated in the seltzer space. So a few months after I tried the earliest version of Casalú we decided to finally get together and launch the company to bring an authentically Latino seltzer to the market,” says co-founder Gabriel Gonzalez.

There are 60 million Latinos in the US alone. As the biggest minority in the country, they are having more impact on pop culture than ever. Casalú aims to represent the roots of these consumers and bridge the gap between them and the hard seltzer market.

Casalú’s founders have deep ties to the music, arts & entertainment, sports, and fashion industries. The brand will be supported in the market with an impactful marketing campaign featuring out of home advertising, social media marketing, traditional public relations, events, and influencer marketing. To start, Casalú will be self-distributed in the Miami market. The US based company and founders are headquartered in Miami and are supported by a team of the entertainment and drinks industry veterans.

Further information on Casalú will be announced in the coming weeks. In the meantime, for additional information and updates please visit www.drinkcasalu.com and follow the brand on Instagram @DrinkCasalu.