The Cost of Hydro in Ontario vs. Residential Solar Power: What You Need To Know
PREV NEXT
Search

The province of Ontario takes pride in its capacity to create clean, hydro-generated power. However, due to an increase in demand across the province, supply has become constrained. As a result, the cost of traditional energy sources has risen by more than 50% in the previous eight years alone, with an additional 6-7% increase anticipated annually.

Most hydro users in Ontario currently pay Time-Of-Use (TOU) rates, which fluctuate throughout each weekday. This is determined by whether demand is on-peak from 7 a.m. to 11 a.m. and 5 p.m. to 7 p.m., mid-peak from 11 a.m. to 5 p.m., or off-peak from 7 p.m. to 7 a.m. These distinct TOU price periods were implemented to assist consumers in determining when energy demand and expenses are high or low depending on the time of day. The Ontario Energy Board (OEB) typically sets these prices twice a year, on May 1st and November 1st.

Through the implementation of TOU pricing, Ontario residents and small business owners have more control over their electricity bill expenses. This is accomplished through merely changing their usage behaviors when electricity is more costly. Thus, TOU pricing allows the everyday consumer to save more on electricity costs each month. That being said, despite these attempts to lower consumers’ monthly energy expenses, the price of hydro in Ontario continues to rise year after year.

As a result, in today’s economy, citizens of Ontario are urged to employ new renewable energy sources to power their houses and cut energy usage. In fact, Hydro One advises consumers to minimize power use and explore roof top solar panels for their Ontario home as a crucial component in lowering future hydro costs.

What Will Hydro Costs in Ontario Look Like in the Next 10 Years?

Ontario Hydro is a public utility company that delivers power to the majority of the province of Ontario. It is in charge of producing, transferring, and distributing electricity to households, companies, and industries throughout the province. The corporation serves approximately 1.3 million consumers and generates more than 60% of all the power in Ontario. This service was founded in 1906. Since then, to accommodate demand, it has endured extensive price hikes.

Following years of declining consumption, Ontario has begun a period of increasing electricity demand all across the province. This is consistent with the new forecasts from the forthcoming Annual Planning Outlook from the Independent Electricity System Operator (IESO). According to this year’s forecast, Ontario’s power demand would rise at a stable annual rate of roughly 1.7 percent. As a result, Ontario Power Generation (OPG) is regarded as having some of the highest hydro prices in Canada. To that extent, this portion of the article will aim to provide you with a wealth of information on the historical trajectory of hydro expenses in Ontario over the last decade or so, as well as information on how much hydro costs on average today, followed by what hydro will cost in the future.

The Ontario Energy Board (OEB) has produced a study summarizing the province’s expected hydro expenses for the past 10+ years. According to this research, home hydro prices have gone up by 5% from 2020 to 2021. Furthermore, the ‘Ontario Financial Accountability Office (FAO) anticipated that between 2018 and 2021, the average residential ratepayer witnessed a 4.3 percent rise in the price of their electricity on their hydro bills. Despite a study on “hydro prices” produced by the FAO on February 16, 2022, which said that the province of Ontario is committed to reducing its residential electricity bills by 12%.

These are just a few instances of annual rises in consumer hydro prices seen over the previous decade or so. Furthermore, based on statistics supplied by the OEB on TOU pricing from May 1st, 2006, to February 8th, 2022, residents of Ontario may be predicted to have witnessed an overall average rise in their hydro prices of 69.74 percent. This is highlighted further by the line graph below, which depicts the Residential Hydro Price Per kWh Trend from 2006 to 2022. 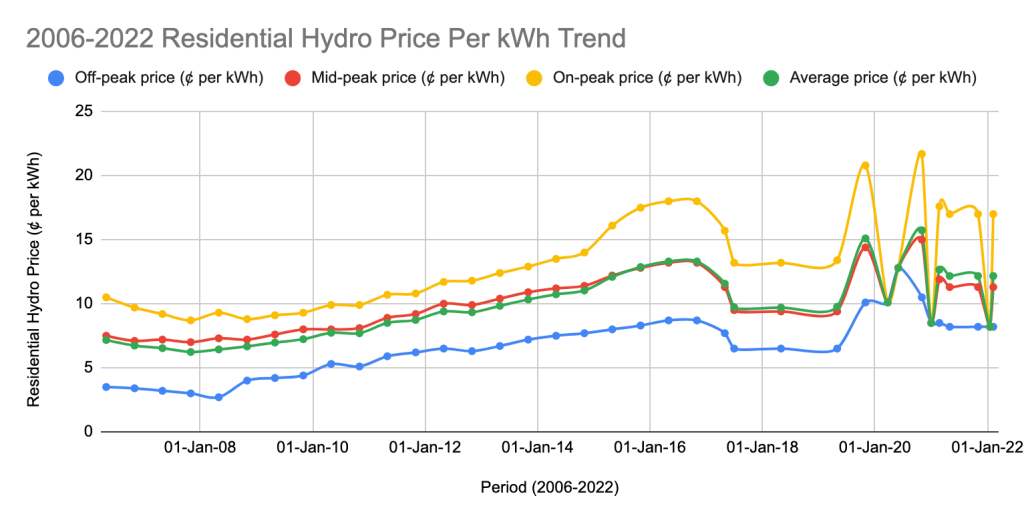 *Disclaimer: This line graph was created using accurate historical information on TOU rates provided by the Ontario Energy Board, from which the average price per kWh (/kWh) was calculated and included.

According to the Ontario Ministry of Energy, the “electricity-rate-relief” program has come to an end. As a result, electricity rates are set to go back up shortly, following a period of instability in the global economy. The Ontario government developed this program to assist families, small businesses, and workers with their rising power consumption demands during the recent pandemic. However, the end of the rate relief program means that, under current Ontario government policy, the cost of household energy is expected to rise by 2% per year on average until 2040, with no hope of subsiding any time soon.

Hydro rates in Ontario have been steadily rising for several years. However, lately, the Liberal government has made many modifications to how they intend to provide hydro to their residents. In order to meet the increasing demand and make sure that Ontario’s electricity needs are met, we need to plan accordingly now.

To that end, they have enacted new rates that will remain in effect until at least 2024. This increase will be progressively phased in over time, so it will not have an immediate impact on people’s finances or lives. However, by 2028, Ontarians’ power costs will have risen significantly—by as much as $200 per year, well above the current provincial average.

How Can Residential Solar Power Help Residents Save Money on Their Hydro Bills?

Global energy demand predictions for 2040, along with steadily rising hydro rates, present a compelling case for investing in new renewable resources such as solar power. Furthermore, as consumer demand grows across the province, costly modifications and new kinds of power generation will be required to satisfy the increased demand. As a result, Hydro One proposes that consumers limit their power use and seek new self-generation alternatives.

As stated by the International Energy Agency (IEA) World Energy Outlook 2020, solar power can now be recognized as the cheapest form of electricity. In fact, the cost of solar panel in Ontario has fallen by more than half in the previous eight years. Moreover, according to a detailed analysis, solar electricity is 20–50% cheaper than traditional power producing methods such as hydro.

As a result, solar power represents both a reliable and renewable energy source that can help residents save money on their utility costs. Already, Ontario consumers are said to have saved an average of $1,000 a year on their hydro bills by installing solar panels on the roofs of their homes. That being said, solar panel systems provide a clean, cost-effective power source with significant savings over current utility pricing. As a result, it is not surprising that the “International Energy Association” (IEA) predicts a 43 percent growth in solar power by 2040.

The Price and Efficiency of Solar Power (PV) Systems Throughout History

Solar power is swiftly becoming a preferred source of power generation for many Canadians, particularly those living in Ontario. Given that Ontario boasts 98 percent of Canada’s solar power generation capacity, and many regulations have historically been limited to Ontario alone. Furthermore, solar power output in Canada has grown significantly since 2010, with 3,325 MW of installed capacity by the end of 2020.

Furthermore, ongoing developments in PV panel manufacturing have drastically decreased solar power generation costs over time. As a result, the cost of a PV module has dropped from $6.18/watt in 2004 to $0.85/watt in 2014. Thus, making solar energy a more accessible and affordable renewable resource for Ontarians. However, despite the rise in accessible solar energy over the last decade, solar power (PV) accounted for barely 5% of Ontario’s entire energy capacity in 2015.

However, due to rapidly declining costs, widespread access to solar panel systems is quickly becoming a reality. In fact, during the last decade, solar electricity has expanded at a compound annual rate of about 50%. Furthermore, during the last two decades, the cost of solar electricity (PV) has dropped by approximately 90%, with future forecasts showing another 15%–20% drop over the next ten years. For example, the average price of a 6.5 kW solar power (PV) system fell by 56.70 percent between 2006 and 2016. As a result, the International Energy Agency (IEA) predicts that solar electricity will account for approximately 27 percent of the world’s energy mix by 2050.

Ontario Hydro is Canada’s largest energy distribution utility company and has been a part of the Canadian energy sector for over a century. Furthermore, the history of the corporation may be separated into five stages: generation and transmission; regulation; power conservation; retailing and finance; and finally restructuring. Throughout its existence, the company has had numerous ups and downs. However, the largest concern for Ontario consumers that still exists today is the annual increase in electricity costs. With the province’s ever-increasing demand, this is more critical than ever.

As a result, residential solar power (PV) systems are an excellent alternative to traditional energy suppliers. Given that solar energy is a plentiful resource that can be used to supply fixed-rate power to households and businesses, it can help to lower or even eliminate your electricity bills. For more information on how solar power can help you eliminate your hydro bill, contact the trained professionals at SolarUp for all of your solar power needs to ensure you get the most out of your investment.