SAN DIEGO, Sept. 9, 2021 /PRNewswire/ — With colder months on the horizon, Ballast Point is celebrating the kick-off to the season with the launch of its flagship Victory at Sea Imperial Porter, now available in 4-packs of 16 oz. cans and on draft at all Ballast Point tasting rooms (San Diego, Anaheim, Long Beach) and Home Brew Mart through the winter. First brewed in 2007 as a draft selection, Victory at Sea made such a splash that Ballast Point began bottling it seasonally in 2009. The release of the longtime employee favorite for the first time in cans marks the brewery’s shift in packaging from glass bottles to 12 oz. and 16 oz. aluminum cans exclusively for its entire portfolio by 2022. Victory at Sea 4-packs are also available to purchase online through December 2021 for delivery throughout California. 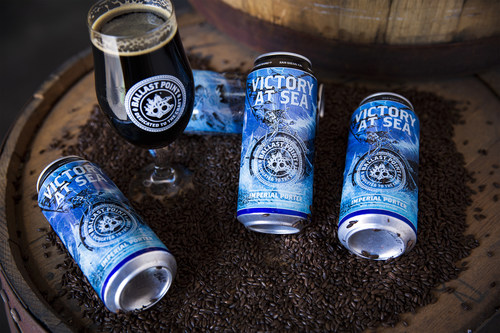 A big porter crafted to weather any storm, the award-winning original Victory at Sea Imperial Porter with coffee and vanilla is a bold, smooth brew with just the right amount of sweetness. Ballast Point infused this robust porter with whole vanilla beans and San Diego’s own Caffe Calabria coffee beans. The subtle roasted notes and minimal acidity of the cold-brewed coffee, balances perfectly with the sweet caramel undertones of the malt, creating a victorious combination. It makes Victory at Sea the perfect pairing beer — from campfires to catamarans — and richly layered dishes like breakfast mole chilaquiles, pulled pork sandwiches, smoky brisket, and German chocolate cake.

As has been the tradition for the past 7 years, Ballast Point will once again “make a date with darkness” in reverence to its flagship Imperial Porter. The popular one-day celebration of dark beers on the Sunday before Christmas always features rare riffs on the original with guests strongly encouraged to embrace the dark side in pirate patch cosplay in all Ballast Point tasting rooms. Earlier this year, Ballast Point gave the postponed 2020 “darkest day of the year” a slight makeover. Instead of one day, Ballast Point extended the celebration of dark beers over an entire week in February. The extended “Victory at Sea Days” format will continue in late 2021 and will feature the seasonal original porter along with rare variations, as voted on by the employees, at all Ballast Point Southern California tasting rooms December 17th – December 19th.

The new Victory at Sea 16 oz. can art was designed by Ballast Point resident artist, Paul Elder, and features the brewery’s signature skeleton navigating through a blown-out choppy sea (searching for a warming, winter ale).

About Ballast Point Brewing Co.What started in 1996 as a small group of homebrewers who simply wanted to make great beer evolved into the team of adventurers known today as Ballast Point. A pioneering brewery born 25 years ago within the hallowed, hopped walls of San Diego’s Home Brew Mart, the complete art of the craft swims in the DNA of Ballast Point and informs both what’s inside and on the can. On March 2, 2020, Ballast Point officially returned to its iconic independent roots under the new ownership of San Diego-headquartered, Kings & Convicts Brewing Co., and continues to be an internationally recognized leader in the industry with five tasting room locations in California and a San Francisco brewpub planned for Spring 2022. From bringing a hoppy twist to a porter or adding four types of malt to its amber ale, to creating the breakthrough gold-medal winning Sculpin IPA, Ballast Point is known for adding its touch and asking if there’s a better way. Ballast Point brews over 50 styles of beer with an emphasis on R&D and innovation and is distributed in select markets across the US and internationally. For more information, visit www.ballastpoint.com.